Where y’all gonna’ go? . . . The Florence Y’alls have directions for baseball fans 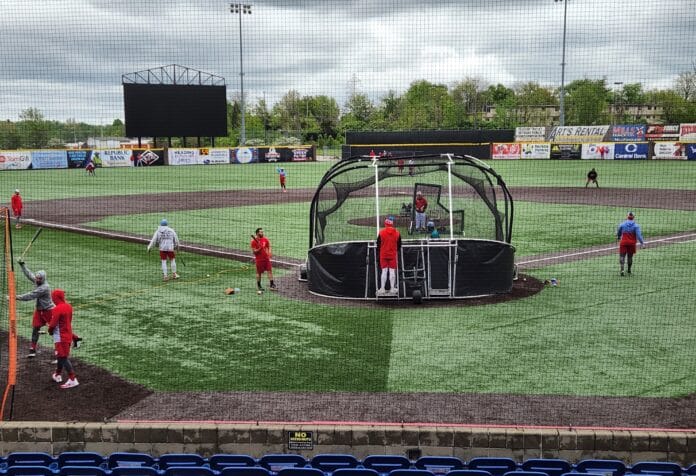 They come from all over. To Northern Kentucky, y’all.

From Buffalo and Ft. Worth, from Austin, Tex. and downriver Owensboro not to mention the frozen tundra of Bismarck, North Dakota, where after 72 straight hours of snow, the total reached 21 inches – and that was in April.

And now here they are, in Y’alls town, if you will. Ready to start another season Thursday evening at 6:34 at the newly renamed Thomas More Stadium against the Tri-City ValleyCats out of Albany, N.Y., area. It’s the first of a nine-game home stand for the Y’alls who will then head to Trois-Riviers and Quebec in Canada in 10 days.

Doing their thing. Living their dream. Doing it through baseball.

Pitcher Karl Craigle is back for the third full season. He’s the Texan from Austin where in the offseason he works at a baseball facility in Georgetown, Tex., helping kids from the ages of seven to 17 learn the game.

But he says goodbye to family and friends for the summer and for the second year in a row, bunks down with a host family in Union. “I love ‘em,” he says of the people who take him in for the next four to five months. Host families get season tickets but “they would do it even if they didn’t,” the former Texas-San Antonio player and Miami Marlins draft pick says.

When he came here, Kraig said his “ultimate goal was to get to the big leagues,” but he has a much more nuanced view now that he’s 27. “But you can’t control that.” And like all the Y’alls, he knows that six alums have made it to the majors over the years. “It’s not impossible.”

What is his goal now? “To stay healthy and to win,” he says. “You can’t worry about what you can’t control.”

But what he can control – which he has done pretty well in recording a 1.75 ERA in 67 games in Florence – he will.

Ray Zuberer III, in his first year with the Y’alls, is an outfielder out of Owensboro Catholic’s top baseball program and Western Kentucky University, and the lone Kentuckian on the roster. He’d pretty much put baseball behind him and taken a job at the Louisville Slugger Science Center where he went to a camp and his boss saw him swing the bat and told him he could see he wasn’t ready to give the game up.

And he wasn’t. After sending out a hitting tape the Y’alls liked, Zuberer spent nearly four months building himself up, going from a slim 170 pounds to his current 200. And yes, he likes it in Northern Kentucky thus far. “I grew up a Reds fan,” he says.

But major league baseball is not his goal now. “I’m not playing for that but for the love of the game . . . I just love the game of baseball” and he wasn’t ready to give it up.

Manager Brian White has been here since 2015, working his way up from bullpen coach to field manager a year ago. A Ft. Worth guy who makes his home in Arlington, Tex., from October to February before spending March in Florida scouting, White isn’t necessarily looking to move on to one of the major league clubs’ minor league systems.

“I did at one point,” he says the way his high school coach and Y’alls manager, Dennis Pelfrey, who brought him here did. “The money’s not as good – and the benefits. But there’s the freedom of independent baseball to build your team your way. I just want to be happy with my team.”

He’s happy. “I like it a lot,” he says, “it’s the first roster I’ve built from the ground up.” This team will play Florence Y’alls ball . . . pitching, defense, and base-running.”

And yeah, White says, “we may run ourselves out of some innings but we’re not going to stand around and wait for something to happen.”

So if the Y’alls are down by a run in the bottom of the ninth as the Reds were Tuesday and open with a double, the game will probably not end with the runner still there. They will find a way to get him over – bunt, ground ball to the right side – so they can score the tying run on a sacrifice fly or ground ball.

Baseball the way you remember it. “We’re not going to rely on the long ball.”
With two straight division winners, this Y’alls team “has a chance to be better than those two,” Craigle says. “We’re going to be dangerous . . . around the league, we’re feared because of our playing style. We’re scrappy and can beat you in a lot of ways.

That will be fine with GM Max Johnson, who started out in 2015 as a University of Cincinnati sports administration intern working in the box office before moving up to general manager this year. “We’ve got 2,000 pre-sold tickets (for the opener) and that’s pretty good with what we hope will be the walk-up crowd in this weather,” he says.

Some of that hope comes from Reds Opening Day when the Y’alls players and mascot were outside Great American Ball Park getting the word out for baseball fans to come 12 miles south and give the Y’alls a look. And then they heard the murmuring about Reds President Phil Castellini’s “Where they gonna’ go?” comment for unhappy Reds fans.

The Y’alls marketing and social media people jumped on that immediately.

“Northern Kentuckians know where we are,” Y’alls President and CEO David DelBello says. A native of Buffalo, DelBello came to Cincinnati with P&G, moved on the become a real estate entrepreneur before getting the opportunity with his ownership group to acquire the Y’alls when previous owner Clint Brown died unexpectedly in 2018 at the age of 63. His wife, Kim, a partner in the then Florence Freedom that they bought out of bankruptcy, wanted to be sure to keep the team here. So DelBello and his group stepped up.

But they “still have a challenge” getting the rest of the greater Cincinnati area to know them, he says. Maybe this is it. The new name has gone great. A franchise that asks fans about what uniform combinations they should wear asked them for a new name in their re-brand.

And while the numbers aren’t public, there is this. In 2020, it cost $825,000 to acquire a franchise in the Frontier League, the oldest (29 years) and largest (16 teams) independent minor league. Today “it’s a million (dollars),” DelBello says.

As for the Castellini verbal faux pas, the Y’alls sold out of 1,000 “Where y’alls going to go” t-shirts in two days.

On and off the field, there’s a ton of upbeat energy at the ball park on Florence’s Freedom Way.

All of which could lead to a good story for Cory Berberian, the team’s assistant broadcaster who is fresh from calling the Bismarck Bobcats Youth Hockey League team’s games. The New Jersey native is a grad of Syracuse’s renowned sports broadcasting program, as is his boss Anthony Mazzini – a Boston guy and Red Sox fan, where alums hope someday to follow in the footsteps of fellow Orangemen Bob Costas and Mike Tirico.

But for right now, they’re keeping that dream alive right here. Where the answer to “Where y’alls gonna go?” could not be more obvious.

They’re going to go to – and maybe go through – Florence . . . and Northern Kentucky.