Op-eds are submitted by the author(s) and do not necessarily reflect the opinion(s) of LINK Media. LINK nky has invited all candidates competing in the May 17, 2022 primary election to submit op-eds in support of their candidacies. 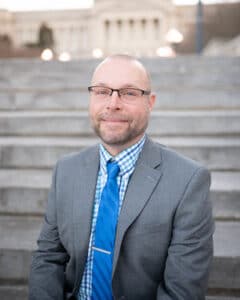 The following op-ed is written by Calen Studler, a candidate in the Republican primary for Kentucky Senate District 20

I thought long and hard about what I’d like to say in this article. There’s many different angles one could take, but I choose to write this as if I’m talking to you directly. After all that’s what I want to be, just a regular person who seeks to represent the people as a true citizen legislator as I’m certainly not a career politician.

I’ll go ahead and get the basics out of the way. I am a 45-year-old PK (that’s preacher’s kid  for those of you who don’t know) and small business owner who works full-time as a residential home appraiser and real estate broker. I have three adult children and four grandchildren. And for those of you who have received a phone call from my campaign, you likely received a phone call directly from my wife. So, win or lose she deserves credit for all  the hard work she’s done for my campaign behind-the-scenes

While you might consider my job now as a typical white-collar job as I am in the real estate  field, it certainly wasn’t my beginning. I was a young 17-year-old father with only a GED faced with real life decisions, long before most of my peers. My career began managing a  restaurant before being hired at the Toyota factory in Georgetown. I spent 10 years in the  factory, working hard to get my real estate license and residential appraisal license. I  worked two jobs until I could make enough money in real estate before bidding farewell to  a very stable job at Toyota. This is why I brand myself a blue-collar Republican, and that is  who is at the heart of this district, other middle-class blue-collar Republicans. Isn’t it time  we elect a true citizen legislator that reflects those whom they seek to represent?

This is by no means an attack on anyone with wealth, or anyone in the so-called 1%. I believe as the Republican Party platform states “Government cannot create prosperity, though government can limit or destroy it. Prosperity is the product of self-discipline, enterprise, saving and investment by individuals but is not an end in itself.” I will fight hard to ensure that Kentucky continues our current trend towards zero state income taxes so that we can all be more prosperous.

I am also an advocate for freedom. Freedom is not created by more regulation it is created by deregulation and removal of red tape hindrances to prosperity. However, freedom does have a price. My freedom can be uncomfortable for you as your freedom could be uncomfortable to me, and we must respect that. As President Reagan once said “Government’s first duty is to protect the people, not run their lives.” In essence, freedom is increased when government is decreased.

As a candidate in a four-way primary, it’s always hard to differentiate yourself when you all agree on the basic tenets of the Republican Party. I am 100% pro-life, I have twice been endorsed by Kentucky Right to Life in my previous campaigns, and three times had the NRA AQ rating. This is the highest rating you can receive as an unelected candidate without  a voting record. None of my views have changed. I’ve been consistent in every campaign I have ran with my stances on the issues.

So where is the real difference?

The difference in this campaign is simply geography and what I’m about to say next might not sit well with some, but for those who believe in facts, you do need to understand the demographic of this new senate district. The largest voting bloc in this district in the general election will be state employees and state retirees. This bodes well for a candidate from Franklin County, where I live, and where 45% of the population of this new district lives. Franklin County also has one of the highest voter turnouts in the state and trust me, they do delineate between voting red at the federal level and blue at a state level in many cases. It’s imperative that we have a candidate that knows how to relate to state employees  and state retirees. My mother is a state retiree, so trust me I’m fluent in the issues that are  going to be on voter’s minds in November. While I do believe this district certainly leans  red, we are still outnumbered on paper by voter registration and will be facing an  unopposed Democrat from Franklin County who worked with former Governor Fletcher,  thereby having crossover appeal to some Franklin County Republican voter’s I’m sure. So, in closing I will say this, vote with your head not your heart. Pray about your vote. Don’t vote for anyone arbitrarily just because you might know them or even know their name. Always vote policy over personality. For more information about myself, feel free to call me because there were many issues I would like to have wrote about today, but I am limited on  what I can do in this op-ed. My phone number is on my website studlerforkentucky.com. I look forward to hearing from you!

Inside LINK: The hard work of covering elections