Northern Kentuckians named to the KHSAA Hall of Fame 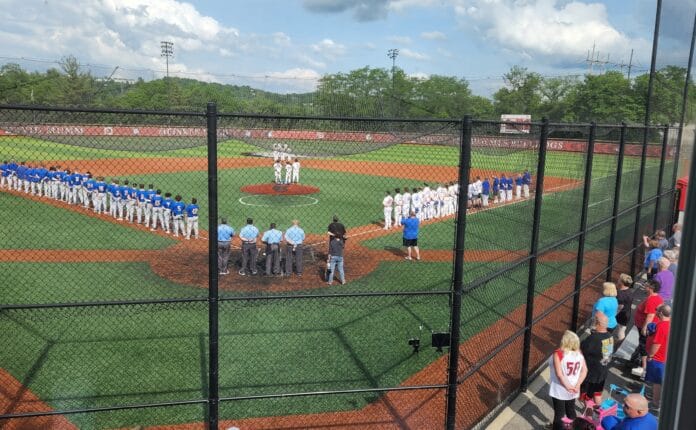 If you had Newport Central Catholic to be the only one of the four Meinken bracket teams to advance to Saturday’s regional baseball semifinals after Wednesday’s first round, you would be correct, as preposterous as that might sound.

And if you had high-flying Covington Catholic losing for the third time to St. Henry, which advances to play a Highlands team that took extra innings to get past Ryle, and on to the Saturday semis, your prognostication skills are on the money.

But Day 1 of the Northern Kentucky baseball regionals was hardly simple and straightforward. Not even a little bit. Here’s how it played out.

An 18-12 NewCath team was clearly the odd man out in the Meinken bracket. Would it be a deep 25-6 Beechwood team that’s been on top for most of the spring here. Or the Conner Cougars, at 29-6, the winningest team in Northern Kentucky with all that power. And don’t forget Dixie Heights. Nobody has been hotter than the 24-8 Colonels the last four weeks, winning 12 of their last 13.

NewCath? Hey, that was the 1950s when the Thoroughbreds had the state’s best baseball program. But they’re a small school now. And there was Conner in the other dugout.

NewCath Coach Jeff Martin had done some figuring. He had it folded up on a piece of paper he used to motivate his kids, make them mad, maybe.
These were the numbers: the last 22 times these teams had played, Conner had won 18, NewCath just four. The scoring differential? How about 149-79 for the Hebron school.

“One of the great turnaround stories up here,” Martin said respectfully of the now-dominant Cougars. So how’d it go as the teams dodged rain clouds, thunder but no lightning in Game 1 Wednesday?

Pretty well from NewCath’s point of view. It took the Breds eight innings but with NewCath taking advantage of every opportunity Conner gifted them, the 7-4 upset was ultimately no surprise because NewCath did not return the favor.

Even if it took a base hit bunt in the fourth to erase a no-hitter and get the NewCath offense in the game, down 2-0. Before that inning was over, despite two strikeouts, NewCath’s two timely RBI singles tied it. But Conner matched that before NewCath took the lead thanks to a couple of Conner infield errors that had this one 4-4 through seven innings.

Three more Conner errors in the eighth and the Thoroughbreds went into the bottom half of the inning with a 7-4 lead. And despite giving up a double and a base on balls, NewCath backup pitcher – and regular catcher – Brennan Seiter went to his slow curve ball for a pair of big-time strikeouts against that Conner power.

“I am so gassed,” Seiter told his fist-bumping teammates as he collected himself in the dugout after four innings behind the plate and four more on the mound. “Those guys hit fastballs,” he said. And on 0-2, they weren’t going to see one from him, not after pounding deep foul balls all over Covington.

“That’s why you play the game,” Martin said as he congratulated his guys for invoking the old NewCath spirit in this one. “We’re battlers,” he said. His players say that term applies to their coach, who underwent bypass surgery right before the season and here he is. And here they are.

“We had pitching and clutch hitting,” Martin said. That’s what wins this time of year. “And now we’re playing on Saturday.”

And Conner is not after a 29-7 season that saw the Cougars rack up a school-record for wins. “This is a great group of kids,” Conner Coach Brad Arlinghaus said. “They’ve cemented their status as a great Conner team.

“But all year long we’ve gotten the big hit,” he said, “how many did we leave on? Bet it’s in double digits.” It was. The number: an unlucky 13.

“We battled, we just came up short,” Arlinghaus said of a post-game that was filled with hugs and tears, lots of each, with one of the seniors telling the underclassmen: “I want you guys to break our record.”

Ayden Lohr, the junior basketball star who hit for the near cycle with a single, double, and triple, will be back to lead them.

But that was little consolation for the 10 seniors who just did not look like they wanted to vacate Meinken. This season had been so much fun, with so much they got done, they didn’t want to say goodbye to it. And it’s hard to blame them.

“That’s baseball,” Arlinghaus said of the game you love to hate.
As for Martin, in his drive to bring the ‘Breds back, “This is a great step forward. We’ll be playing Saturday.”

Who they’ll be playing is one of life’s great mysteries right now.

Dixie Heights had been through this last week, when the dark clouds, some rain and then multiple lightning strikes in the distance had the umpires invoking the mandatory 30-minute halt until there was no more lightning.

There was. At least enough to have a decision to re-start the game at 10 p.m. changed within minutes and the fans sent home and the game set to be resumed Thursday at 5 at Thomas More Stadium in Florence where both games were played Wednesday.

“We both have exams tomorrow,” Beechwood Coach Kevin Gray said, “and then we have graduation Friday.” Playing past midnight in the middle of the week, or just waiting for the lightning to stop, did not seem a great option.

“Tomorrow’s our last day,” Dixie Heights Coach Chris Maxwell said of his school. “We can wait it out.” But like the other night in the District at Dixie, the lightning didn’t stop. And the game had to be called. As this one was.

One plus. Playing the game Thursday at 5 means they don’t have to play with Meinken’s under-powered lights. And if the game should be rained out, they would come back and play at 4 Friday.

Highlands Coach Jeremy Baioni wasn’t quite sure of the score. “Was it 5-4?” he asked. It was. Much of that was thanks to a three-run home run by Jack Hendrix in a four-run fifth for a 4-1 lead. That kind of power is not what the Bluebirds count on but they’ll take it, Baioni said.

Good thing they did because Ryle’s Brayden Stewart hit a two-run blast to help get it back even at 4-4 after seven innings. And that’s when things got interesting.

In the bottom of the eighth, with a man on third, one out, and two strikes on the batter, the Birds bunted. “We’d been talking a lot about it,” Baioni said of the surprise, not-exactly suicide squeeze.

Abe Hils went 5 1/3 innings for the Birds, allowed six hits and two runs before Ryan DeBurger came on in the sixth to earn the win. Ryle had eight hits to Highlands’ four but left seven on to just four for a Highlands team that improved to 20-16.

Facing the Bluebirds Saturday will be a St. Henry team that split the season series with each team winning a one-run game.

The mastery of the Crusaders over CovCath continued Wednesday as St. Henry prevailed for the third time in four meetings this season in the nightcap at Thomas More Stadium.

Anything special that accounts for that, St. Henry Coach Greg Pass was asked. “I think it’s just the game of baseball . . . you never know.”

One thing Pass did know was that after a season where his best player had missed much of it, Owen Eilerman was back. Back on the mound for his fourth start. “He’s our best pitcher by far,” Pass said.

And back in the batting order where the lefty pounded a double for the Crusaders.

“We put together some good swings, had some good at-bats,” Pass said of the way his team prepared for this game.

Those good at-bats especially come at the top of the order where the 1-2 hitters – Carter Scheben and Matt Resing – “are a good combo,” Pass said. Of Resing, “He just hits the ball hard.”

The win puts the Crusaders at 17-13 going into Saturday’s semifinals.

And the loss ends CovCath Coach Bill Krumpelbeck’s streak of 20-win seasons at 34 for the 18-15 Colonels.