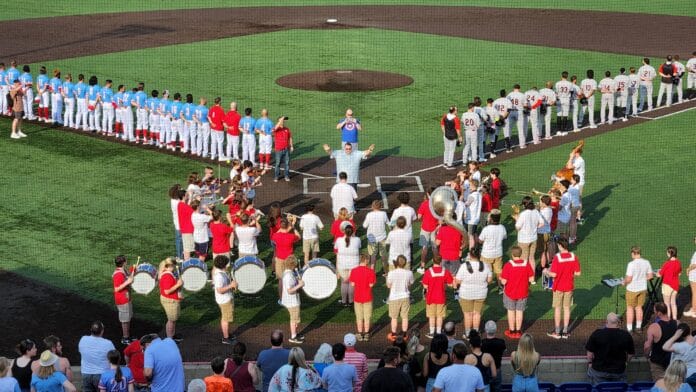 There are a couple of ways to write up a baseball game: You can do it like you’re replaying the box score for readers – or reviewing a play or a movie.

We’ll go with the latter. Especially on opening night. Hey, if you really cared for a play-by-play, you’d have been here. Which gets us to the second issue when reviewing a Florence Y’alls game while it’s going on.

How many are here, you find yourself asking yourself as there’s almost as much going on in the Kids’ Zone down the left-field line and on the large concourse from foul pole to foul pole as in much of the grandstand. There are as many people in the beer line, at times, as in some of the far sections.

So we won’t worry about how many were here for the 6:34 start of the Y’alls’ season and the opening nine-game home stand in a first-ever matchup with the Tri-City ValleyCats out of New York State.

There were kids in strollers and senior citizens in wheelchairs. And men in shorts. Lots of men in shorts. Long pants were few and far between. You cannot fool these folks. They knew it was 86 degrees for the first pitch – or all four of the first pitches actually — before the Conner High band – more like an orchestra with the violins, cello, bass and – were those xylophones? – played “America the Beautiful” and “The Star Spangled Banner.”

But first a personal peeve. And you may not agree with me here and that’s fine. But there’s a reason only the Dayton Flyers wear light blue and red in college athletics. It’s kinda’ ugly. It looks like you’re here for a softball game or maybe you’re a town all-star team that had to throw together uniforms at the last minute and this is all they had at the sporting goods store. Maybe it helps sell stuff at the Y’alls General Store but it doesn’t help the Y’alls look like a serious baseball team.

More than almost any other sport, in baseball, you have to look the part.
Even worse when your opening game opponent – the ValleyCats out of the Troy/Schenectady/Albany region – show up in classic all-grey travel unis with black socks, lettering and caps – and just a bit of red trim, looking very much like a major league baseball team.

Just the Y’alls caps alone, the tri-color ones with the white front panel that look like you bought them at the truck stop up the street, are enough to make it look like you’re not all that serious.

OK, back to the game. Y’alls Manager Brian White says he doesn’t like building a baseball team on 30-home-run hitters. “Pitching, defense and base-running,” he says, that’s where it’s at. He wants his guys to be scrappy little fighters.

After 6-foot-2, 220-pound Denis Phipps, who hit 21 homers last season, popped a two-run homer in the top of the first as the third hitter up. Then 6-6, 245-pound Brad Zunica hit Jonaiker Villalobos’ next pitch over the Arlinghaus Plumbing sign in left-center field, pretty much where Phipps’ ball had landed.

Not 10 minutes into the season and the Y’alls were down 3-0. By the end of the inning, after 6-8, 250-pound Carson McCusker doubled home another run, it was 4-0. And the Y’alls hadn’t swung a bat yet. The good news is that this three-hour-and-10-minute game went long enough for the Y’alls new digital scoreboard to be bright enough for fans to enjoy it.

Not sure if the hundreds of kids down both foul lines even noticed. They were having a heck of a time. As were the folks congregating on the wide concourse where all their friends – and the concessions – were.

By the bottom of the second, Y’alls broadcaster/media relations guy Anthony Mazzini, here from Boston and Syracuse University, was talking about how “Cincinnati chili has no beans.”

Or how the Y’alls were going into this game with a roster that listed just one catcher and four infielders – the minimum at both positions – and it was no problem. “They love versatility,” Anthony said. Although if the backup utility infielder/catcher were to get hurt as a sub, “I might be catching.”

Later on, with reality setting in, Anthony was noting how “It’s a long season, plenty of time to recover.”

Just not quite enough in this game. Rack up another two-run homer for the ValleyCats who jumped out 5-0 before the home team got itself going. And that they did, outhitting the ValleyCats 11-8. By the time this one was over, the two teams had cycled through 10 pitchers (Y’alls four, ValleyCats six). And the size advantage continued there for the TCVCs as their first reliever, Eddy Tavares, was 6-6, 250 pounds.

After the lone Kentuckian on the Y’alls roster, Ray Zuberer III from Owensboro, cracked a sharp pinch hit in the seventh, the Y’alls made it 7-3 with Zuberer on second and two outs. And as if to fight fire with fire, Manager White sent all 6-feet-9 and 300 pounds of pinch-hitting power, Brennan Price, to the plate.

But a called third strike, the third time it happened to end an inning for the Y’alls, sent Price packing. And despite another run in the bottom of the ninth, that was as close as the Y’alls got in a 7-4 loss to open the season.

“That’s our first loss in an opener since I came here in 2015,” Y’alls manager White said. “There are going to be jitters on opening day. We didn’t keep the ball down . . . and we were overswinging with men on base. We’ll look at the video and learn from this.”

With 95 games to go, White took the long view. “It’s just one game.” And if they lose the first game this year, maybe they finish up by winning the last one.

Y’ALLS NOTABLES: Friday night’s game between these teams starts at 7:03. It will mark the first of nine fireworks nights for the Y’alls . . . Wonder how many cars pass by the Y’alls ballpark? How about 160,000 a day on I-75. “That’s a million a week,” President and CEO David Del Bello says. Just need to get a few of those to stop on by . . . the Y’alls roster shows players from 11 states (Texas, California, North Carolina and Virginia lead the way with three apiece) with others from New Jersey and Ohio (two each) with one each from Tennessee, Georgia, Indiana, Oklahoma, and Kentucky . . . seven international players come from three countries – three each from Venezuela and the Dominican Republic and one from Canada . . . 14 of the Y’alls are classified as rookies, seven Rookie-1 and seven Rookie-2 . . . there are 34 outfield fence advertising signs, giving Thomas More Stadium the classic minor league park look . . . It’s a long hike from the dugouts for both teams to the clubhouses across the parking lot and on top of a hill overlooking the stadium. No dressing facilities in the stadium . . . Oldest Y’all is third-baseman Craig Massey, a 33-year-old from Bells, Tennessee . . . best special promotion on a night when there was something going on every inning was the kids race from the left field foul line to the right field foul line that attracted more than 50 boys and girls who could not have been having more fun.

Doctors told him he wouldn’t play baseball. He defied the odds and saved his team’s season