Beechwood learns it can play with Elder, just not quite beat the Price Hill powerhouse

NKY football previews: After bye weeks, Beechwood tries to get back, TMU hosts NAIA’s No. 3 team 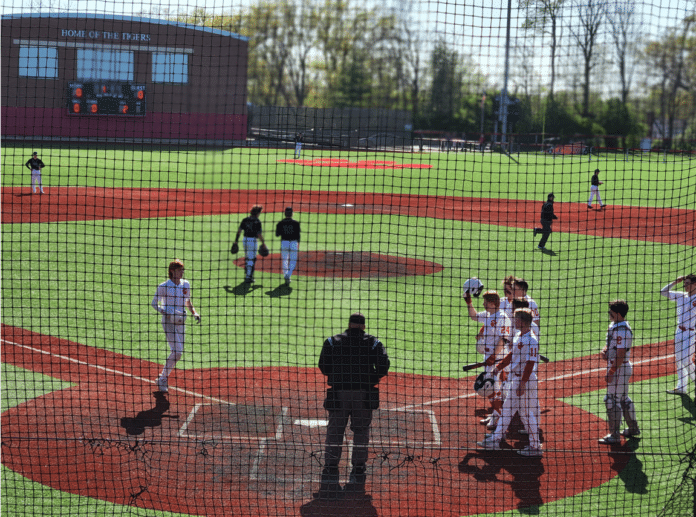 Tuesday’s 8-6 loss to an Elder baseball team making its first-ever trip to Ft. Mitchell is exactly why you play the perennial powerhouse Panthers, if you’re a Beechwood team that has won 17 of its first 18 games.

You learn things. You see things, things you don’t see every day – or any day – in Kentucky.

Same for an Elder team that probably won’t win the school’s 13th Ohio state championship, something the Panthers have done at least once every single decade since the 1930s.

As a group of Elder players were coming round the corner from the parking lot and noticing all the red pennants and Tiger Paws and signage were realizing on their venture into Kentucky: “I thought they were orange,” one said of the Beechwood colors. “I thought they were blue,” said another.

Whatever Beechwood was for most of its baseball program, the Tigers weren’t in Elder’s league, even if at 6-5 coming in here against as good a schedule as any Kentucky team has ever played, this Elder team won’t add quite as many wins as usual to the 600-plus that Mark Thompson has racked up in his 32 seasons coaching at the Price Hill power.

Tuesday, Beechwood was in Elder’s league. “We had a chance to win this game,” Beechwood Coach Kevin Gray told his team after watching it let slip away a 4-0 first inning lead thanks to Jackson Roseburrow’s grand slam that clearly opened Elder’s eyes.

“We should have won this game,” Gray said, thinking of the four Elder runs scored by players who got on base through walks. Or the couple of base-running mistakes his guys made. Or that double down the left field line called foul that was inches fair. Or that ground ball where no one covered first base. “But we learned a lot.”

“The Battle for the Brent Spence,” the Beechwood radio guys called it. And while that might have been overstating things a bit, it was more like a quiz show at the border to see which team had the answers.

“You can’t make mental mistakes,” Gray told his team afterward, “but not just against Elder, but against Conner and Cooper, CovCath and Walton-Verona.”
Which gets us to where this mid-week game was played, with neither team going with its top couple of pitching aces. Elder has the GCL to face.
Beechwood is off to Eastern Kentucky University Saturday for the eight-team All “A” Classic finals with a rematch against Walton-Verona after last weekend’s 4-3 win over the Bearcats.

But first there’s a game Wednesday with a decent Dixie Heights team. “We’ll go with whoever we’ve got,” Gray said after going with four pitchers Tuesday – second baseman Sam Cottengim, reliever Jack Briney, back-from-shoulder-surgery Brett Holladay for a couple of rehab innings and finally freshman Chase Flaherty, who looks like the next phenom in Ft. Mitchell with his fluid, natural release and deceptive ball movement.

“We’re setting everything up for Saturday,” Gray said. Beat Walton-Verona and it’s on to the Sunday semifinals against top teams like Danville and Owensboro Catholic expected to be there.

But it’s doubtful any of them can make the kind of play Elder’s second-baseman Kevin Hilton did backhanding a ground ball behind second and then somehow throwing out Mitchell Berger at the plate. The catch was amazing, the throw even better and the tag by catcher Drew Edrich as good as the pick and the throw.

“They have players who can make plays we won’t see all year,” Gray said. Like the bang-bang ball Ben Meier hit off the left-center field wall, one of his three hits, that saw a perfect throw and tag nail him trying for a double.

Hilton followed his fielding gem with a one-out home run to open Elder’s four-run sixth off Holladay as the 23rd-ranked (in Ohio) Panthers racked up 11 hits after trailing by four right out of the gate for their seventh win in 12 games.

The now 17-2 Tigers, ranked seventh in Kentucky this week right behind No. 6 Conner, outhit Elder 12-11 with Meier getting three to lead the way and Brice Estep and Berger two apiece. And they did that with big first baseman Jackson Tanner out sick.

But Beechwood drew just three walks from Elder’s four pitchers – with one of those erased on the second player tagged out at home when Estep tried to score on a wild pitch and didn’t make it.

Of all-state running back Berger not making it earlier from third on the ground ball behind second, Gray said “He was the guy we wanted there.” But Elder was just a bit better on both plays saving a pair of runs.

That’s the hope anyway. They’ll find out this weekend.