How non-citizens could patch the state’s workforce problem 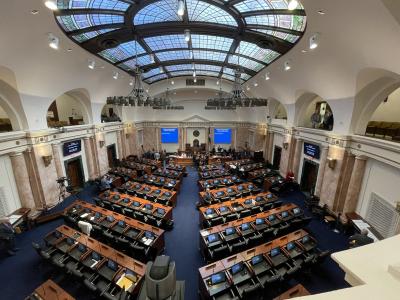 Kentucky is on track for its first decrease in income tax rate from 5% to 4.5% after the state recorded its second highest surplus for fiscal year 2022.

“We took in roughly about $1 billion more than was forecast,” said co-chair of the Interim Joint Committee on Appropriations and Revenue Sen. Chris McDaniel (R-Ryland Heights) on the 2022 General Fund numbers.

This comes after Kentucky recorded a surplus of more than $1.1 billion for fiscal year 2021. The income tax reductions, which will take place over the course of 10 years with a half percent reduction each year, depend on how the state is doing financially.

The first cut, scheduled to take place on Jan. 1, 2023, is due to the positive financial numbers from 2021. The cut in 2024 is based on the 2022 numbers, and McDaniel said it looks like that income tax cut will likely happen, as well.

John Hicks, the state budget director, presented the General Fund numbers and said the fund’s growth in the past two years is unprecedented in modern times.

Hicks said the other economic data in Kentucky is also positive and expects the August employment data to show the commonwealth recovered all the jobs it lost during the COVID-19 pandemic.

The first cut is expected to save taxpayers an estimated $600 million to $650 million. But it will come at the expense of other taxes. In order to accommodate the income tax reduction, it would raise the sales tax or add user fees to many digital products, such as books, ring tones, movies, and digital news products. It would also raise the sales tax on digital platforms such as Uber and Lyft.

Related:  You will gain an hour of sleep this weekend as we fall back for daylight saving

“Among my grave concerns with what I’ve read so far is that this would add a six percent service tax to taxi and Uber fees,” said Rep. Rachel Roberts (D-Newport) when the legislature first introduced the bill. “Taxis are a lifeline for the working poor, especially as we starve our public transportation systems and more and more people rely on these services to get to work or doctor’s appointments.”

While Republicans in the legislature backed the income tax cuts, the Kentucky Center for Economic Policy said the bill would benefit the rich and hurt normal Kentuckians.

“HB 8 would begin aggressively cutting Kentucky’s income tax rate next year and eventually completely eliminate it, devastating funding for Kentucky’s schools, health, human services, infrastructure, and other needs,” said Jason Bailey, the executive director of the center said in an op-ed. “The resulting tax cut is skewed heavily to the rich. HB 8 includes a few modest revenue raisers that will come nowhere close to offsetting the lost revenue from the eliminated income tax, which funds 40% of Kentucky’s budget.”

At a press conference during the 2022 legislative session, Gov. Andy Beshear warned against any significant tax reform that would add money to the pockets of corporations and wealthy Kentuckians.