Gas prices in NKY reach average prices of $4.33 per gallon 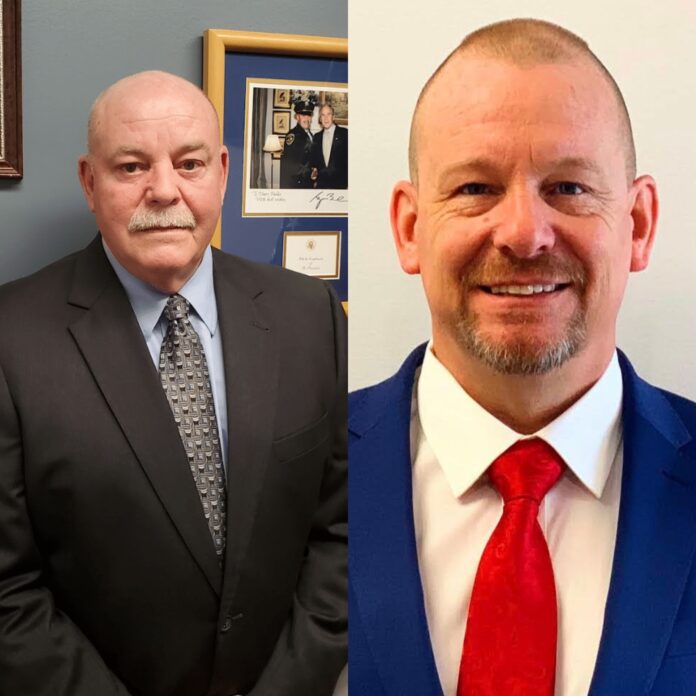 Kenton County Jailer Marc Fields, appointed to that role in early 2021, faces a challenger in Tuesday’s primary who, documents show, was terminated by Fields for striking an inmate.

Fields was chief deputy at the jail before being appointed jailer following the retirement of Terry Carl.

Former Kenton County corrections officer Steve Larson, according to documents obtained by LINK nky, was fired on July 30, 2020 for striking an inmate in the face and head with a closed fist. The incident left a gash on the inmate’s face.

LINK nky talked to both candidates ahead of the May 17 Republican primary.

Duties of a Jailer

The Commonwealth of Kentucky is the only state to elect a jailer as a partisan constitutional officer.

The jailer is primarily responsible for processing inmates and maintaining order in the jail. Jailers are considered “Sworn State Peace Officers” in Kentucky.

The Kenton County Detention Center is the largest department in the county government. It also operates the largest budget at approximately $19 million.

Fields has spent 31 years in law enforcement, including 27 in the Erlanger Police Department, where he was chief for 12 of those years.

Larson is new to politics and is making his first run for office.

Larson is a veteran of the United States Air Force with four years of active duty service. He also operates a YouTube channel titled SGT Beast Larson where he makes self defense instructional videos.

In 2015, Larson moved to Georgia to be closer to his daughter, who was in nursing school. He took the job at Hays State, a level 5 maximum security prison. Larson was a member of the emergency response team and was the assistant commander of the Tactical/Riot Squad.

While at Hays, Larson said he managed isolation units with up to 364 inmates, planned and supervised special events for inmates, and conducted high risk transports, including the mass dorm movements to and from the dining halls.

One of Fields’s main focuses as the current jailer has been reducing the inmate population of the Kenton County Detention Center, he said. Kenton County has transferred approximately 600 inmates to other facilities over the past year, which has saved taxpayers money, Fields said.

Fields has also focused on reducing use of force incidents in the Kenton County Detention Center.

Larson also said one of his main campaign focuses is cutting down on use-of-force incidents and failure to train lawsuits at the Kenton County Detention Center.

“This can be attributed to a lack of deputies, uncertified instructors, improper or not actually training new deputies, and the deputies constant 12-hour shifts,” Larson said in an op-ed submitted to LINK nky. “They simply are overworked and under-trained. All these factors lead to a huge decrease in morale and several deputies have had enough and quit.”

After Larson’s 2020 use of force incident, Fields cited Larson for violating KCDC Policy 3.1.8, which defines reasonable force as, “the amount of force required to overcome the use or immediately threatened use of force against KCDC personnel, other persons, or property, which based on the facts or circumstances the deputy reasonably believes would cause an ordinary person to act or think in a similar manner.”

Larson stated that the inmate attempted to bite him. However, upon review of the body camera footage and testimony of four correctional officers who witnessed the event, it was determined that the inmate did not attempt to bite Larson.

In separate documents obtained in an open records request, while Larson was employed by the Boone County Sheriff’s Office, he was involved in a number of accidents in his cruiser, and was cited in three separate citizens complaints for speeding and parking violations. While employed at Hays State prison in Georgia, Larson was disciplined for improperly leaving a control room to get involved in a use-of-force incident.

In talking about his campaign, Larson has said Fields “failed to recruit, hire, and train deputies to be able to provide a safe and secure environment for the staff and inmates.”

One of the solutions Larson proposes is a change of leadership in the jailer position and its command staff. Larson said his previous career experience of military service, law enforcement, corrections, and self defense instruction will help him potentially recruit, train and hire new deputies.

Fields said his staff has prioritized both the physical and mental health of Kenton County’s inmates, as well as staff. Fields has added an intake nurse, a follow-up nurse and a nurse practitioner to help address physical health, mental health, and substance abuse issues inmates have within 24 hours of intake.

“Most lawsuits that occur and the corrections facility occur for medical, which is number one, and number two, are those use-of-force issues,” Fields said. “So we wanted to really address those two biggest liabilities that we saw when we started doing this.”

Fields said one of the biggest challenges the Kenton County Detention Center faces is staffing issues. In order to curb this, Fields said that he has implemented stronger staff recruitment and training methods. Kenton County has sent lieutenants to the University of Louisville Southern Police Institute to complete law enforcement training classes in order to better develop on-the-job training and leadership skills.

“We thought that really the leadership needed to be developed in our command staff,” Fields said.

One of the solutions Larson proposes to solve the staffing problem is a change of leadership in the jailer position and its command staff. Larson said his previous career experience of military service, law enforcement, corrections, and self defense instruction will help him potentially recruit, train and hire new deputies.

Larson said he would implement a new organizational structure to the Command and Operations Department, which he hopes will allow corrections officers and staff to advance in their careers and find fulfillment within their roles.

Larson said he wants to update jail policies and procedures so corrections officers can, “meet the current standards of providing a safe and secure environment for both staff and inmates. I will restore the staffing numbers required, so the deputies can get back to their normal 40 hour work week allowing a more normal and routine home and family life.”

Fields has implemented an inmate workers program that allows inmates to earn a small income from the state, shave time off of their sentences, and improve their sense of belonging and self-worth. The program is available to any city in Kenton County.

“We have been putting our inmate work crews back out,” Fields said. “I think that this is a benefit to the community. We have been doing that with the County for quite a while. COVID kind of shut it down, but now we did get that back.”

“My career is an open book. I have the leadership experience and proven track record to handle these responsibilities in a conservative and just manner,” Fields said in an op-ed submitted to LINK nky.