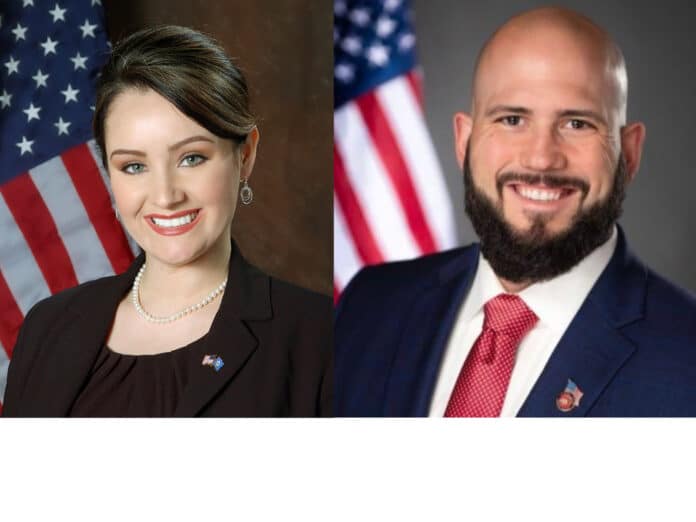 Incumbent Rep. Savannah Maddox (R-Dry Ridge) is hoping to build upon her work in the 61st District. But first, she’ll face a primary challenger on May 17 in Jarrod Lykins.

Maddox is also having her conservatism called into question by a dark-money group called Commonwealth Conservatives, which is not registered with the Kentucky Registry of Campaign Finance. The Washington, D.C.-based group has been mailing out direct mailers and digital ads with the headline “Questionable Conservatism.”

A dark-money group refers to any group spending money on political campaigns that operate under a nonprofit umbrella that allows them not to report their political donors. This allows them to receive unlimited donations from any groups.

“It’s clearly a dark money group, and the emails are being sent out of Washington, D.C., but the hunch that I have is that it would possibly be related to vaccine mandate legislation potentially, but I have nothing confirmed in terms of who was behind this organization,” Maddox said. “I just hope to get to the bottom of it.”

Maddox’s record is quite conservative. She regularly puts forward bills to loosen gun laws in Kentucky and introduced House Bill 28 this past session that would have prevented companies from enforcing vaccine mandates. The bill died in a Senate committee.

“I have a proven track record of fighting for conservative values,” Maddox said. “I filed and passed constitutional carry in 2019 in order to expand the ability of law-abiding Kentuckians to exercise their Second Amendment rights. At the campus free speech act in 2019, I was actually invited by former President Donald Trump himself to the White House as a result of my efforts on trying to protect free speech on college campuses, and a clear distinction is that I’m the only candidate that has been endorsed by Donald Trump.”

Her opponent is Jarrod Lykins, a United States Marine Corps combat veteran. Like Maddox, he supports conservative values and believes that the attack ads against Maddox are unfair.

“I believe elections should be run with integrity and honor,” Lykins said. “The core values of the United States Marine Corps are Honor, Courage, Commitment. Those play a factor in how I have run my campaign, and I believe a candidate’s record can speak for themselves, whether it be good or bad.”

Lykins isn’t into the heavy rhetoric being used in politics today. He’s also never held office, and he believes these are the things that separate him.

“I have never ran or held a political office,” Lykins said. “I have worked in both the private and public sector. I’ve actively served our nation in combat with my service in the United States Marine Corps. I will be active in the counties I serve and actively participate in local government and community organizations. I am focused on our district and have only campaigned in the 61st  district.”

Maddox said she is seriously considering a run for governor, but her current focus is on the 61st district. However, she’s been humbled by the support she’s received to run for governor.

Lykins believes that his military experience and public and private sector experience will make him right for the district.

“As a United States Marine Corps combat veteran, I have seen what it is like to not have the freedoms we as Americans enjoy,” Lykins said. “I have experience in both the private and public sectors as well as a master’s degree in Diplomacy and International Relations with specializations in International Economic Development and International Security. Along with my love for country and my experiences, I am better able to understand different points of view and bring those viewpoints together to ensure a brighter future that we are all a part of.”