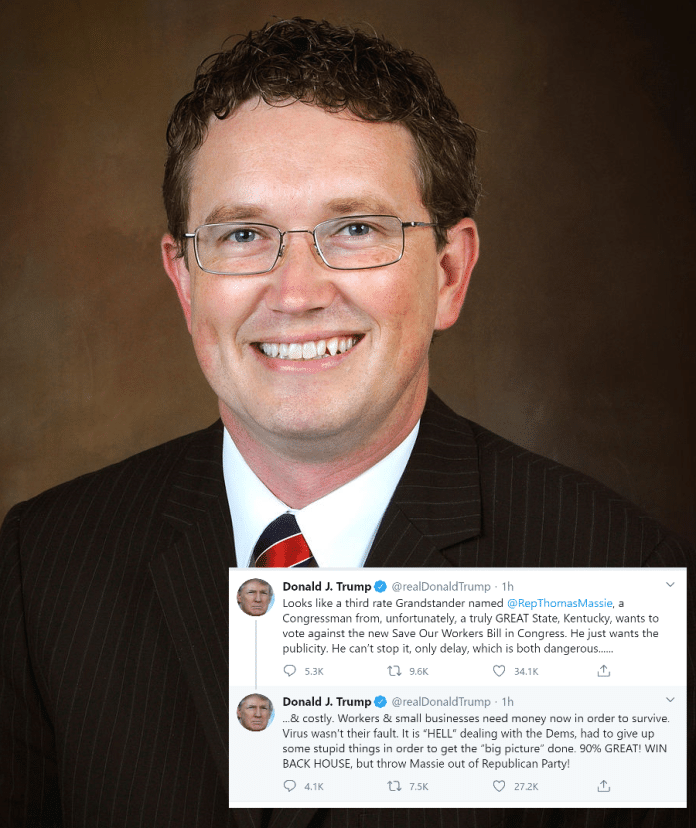 Former President Donald Trump announced an endorsement for Northern Kentucky Congressman Thomas Massie. This comes despite the former president previously saying that the 4th District representative is “a third rate Grandstander” during the early days of the pandemic.

“Congressman Thomas Massie is a Conservative Warrior for Kentucky’s 4th Congressional District,” Trump said in a statement. “An MIT graduate and a first-rate Defender of the Constitution, Thomas fights hard to Protect your Liberties, especially the First and Second Amendments, which are under siege by the Radical Left. Strong on the Border and our Military and Vets, Thomas Massie has my Complete and Total Endorsement!”

In the spring of 2020, as Trump sought to bolster the country financially amid the early days of the coronavirus pandemic, he railed against Rep. Massie. The Lewis County native voted against the coronavirus emergency relief package, now known as the CARES Act.

“Looks like a third rate Grandstander named @RepThomasMassie, a Congressman from, unfortunately, a truly GREAT State, Kentucky, wants to vote against the new Save Our Workers Bill in Congress,” Trump said via Twitter at the time. “He just wants the publicity. He can’t stop it, only delay, which is both dangerous……”

The $2 trillion legislation passed and helped Americans throughout the pandemic.

“The senate did some voodoo just like with Obamacare,” Massie wrote at the time. “Took a House Bill (HR 748) dealing with taxes, stripped every word, and put their bill in it. The House is just as responsible for killing the origination clause as the Senate. It’s the House’s job to reject the process.”