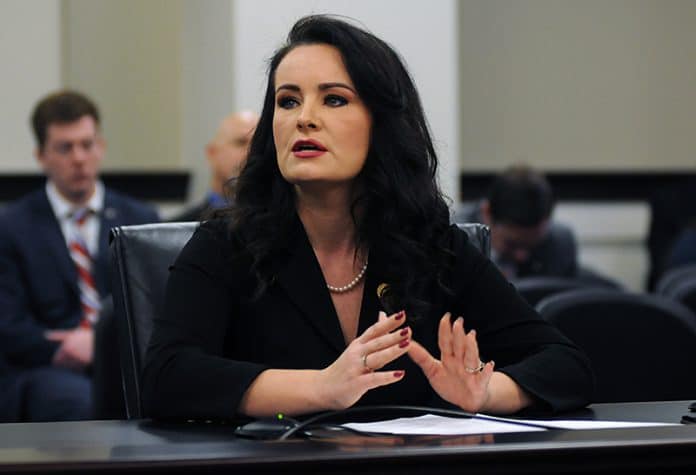 “I am honored to announce that I have been endorsed by Congressman Thomas Massie,” Maddox said. “Congressman Massie is a rock-solid defender of the constitution.”

Maddox announced her bid for governor in June, and is now part of a crowded Republican primary field. The election for governor and other statewide constitutional offices is next year.

“I believe that Kentuckians, by and large, are god-fearing people who just want to live a peaceful, prosperous life in which they are free from undue interference from their government,” Maddox said in her announcement speech in June at the Little Britain Carriage House in Burlington.

The Grant County Republican teased a “surprise” to LINK nky last week when talking about her visit to Fancy Farm.

“I look forward to sharing some exciting campaign news and visiting with folks from all across Kentucky,” she said.

Massie said that when Gov. Andy Beshear shut down churches and the economy to stop the spread of the COVID-19 pandemic, many remained silent, but Maddox sought to reign in his overreach.

“Kentucky needs a leader who will stand up to federal efforts to control every aspect of our businesses, our energy sources, our farms, our health, and our families,” Massie said. “Kentucky needs a governor like Ron Desantis, and Savannah Maddox is that person.”

Maddox was the only gubernatorial candidate who told pointed jokes toward the other GOP candidates at the picnic – Agriculture Commissioner Ryan Quarles, Attorney General Daniel Cameron, and Auditor Mike Harmon. The picnic is known for political jabbing.

Related:  Third honor flight of the year set to take off Tuesday

“Look at these guys,” Maddox said of her gubernatorial candidates, who also spoke for four minutes each. “They’re the opposite of the Dos Equis men; they’re the least interesting men in politics.”

Former Northern Kentucky attorney Eric Deters who is also running for governor lobbied to speak at the event, but was denied. He unofficially made a visit, though, and spoke outside St. Jerome’s Parish, where the event is held, at 7 a.m. He told LINK nky he was snubbed and disrespected by not being allowed on stage.

Deters also brought a contingent of supporters to the venue that held up signs and chanted his name at several points.

“Fancy Farm is a state media-created political event,” Deters said. “It’s a contrived circus. There are only two categories of attendees – Good St. Jerome folks who simply attend their festival and supporters of candidates. There are no neutral votes to be gotten. I and 20 supporters of mine attended the Graves County breakfast and the event only out of what I saw as a political necessity, not a voter achievement necessity.”

Maddox is the only woman in the field so far. However, there is speculation that former U.N. Ambassador Kelly Craft is planning to throw her hat in the ring and potentially choose State Sen. Max Wise (R-Campbellsville) as her running mate, according to reporting by Nick Storm at Kentucky Fried Politics.

Maddox is also up for reelection for her House seat, where she’ll face off against Democrat Debby Lucas Angel in the 61st District this fall.

“She has proven she has the intelligence, the conviction, the courage, and the character that Kentucky deserves,” Massie said of Maddox’s gubernatorial run.