NKY football previews: After bye weeks, Beechwood tries to get back, TMU hosts NAIA’s No. 3 team 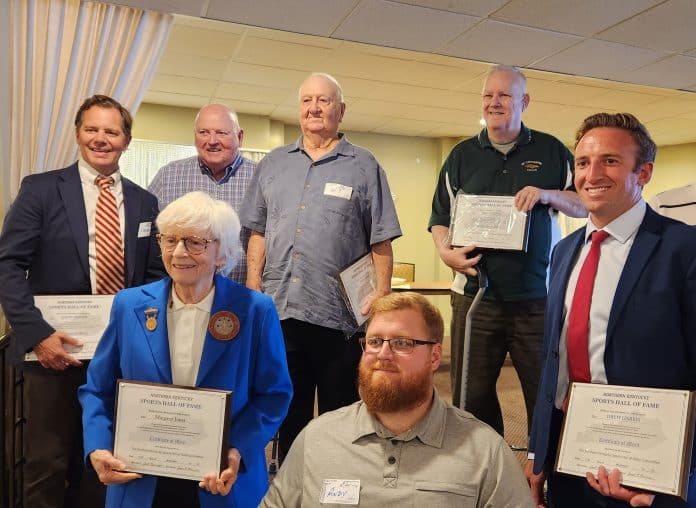 Margaret Jones didn’t think she was famous – or even realize that for many male sports consumers, she was the first Northern Kentucky female athlete any of them had ever read about.

Talk to the newest inductee in the Northern Kentucky Sports Hall of Fame and you realize her takeaways from doing what she did in golf at a young age before Title IX was just how much fun it was, how hard she worked at it, and how much a family affair it was.

Those were the highlight takes from the “five guys and a gal” inductions — as Margaret described them Wednesday at The Arbors in Park Hills. “There must be a song in there somewhere,” Jones said after bursting on to the scene as the youngest Cincinnati Metropolitan women’s golf champion – ever – exactly 60 years ago.

A Ft. Mitchell Country Club and Dixie Heights High School alum, the then Kenton Hills resident has no high school honors to go with the rest of her many awards that she’s in the process of giving to the Behringer-Crawford Museum. Kentucky, of course, didn’t have a state championship for girls until 1965.

Had Kentucky done so, it’s easy to speculate that preceding the great Kaye Beard and Myra Van Hoose, who combined for seven state golf titles from the inaugural year of 1965 through 1973, would have been one Margaret Jones. The good news is that in the years following, Northern Kentucky did produce a pair of girls’ state champions in Notre Dame’s Bonnie Overman and Boone County’s Lori Oldendick.

But by 1962, Margaret, who would go on to become the boys golf coach at Dixie Heights – and the girls basketball coach at Turkeyfoot Jr. High before Title IX – was already playing in the U.S. Open as an amateur where she beat out her playing partner, TV analyst and great pro Judy Rankin, the year it was played in Cincinnati at Kenwood Country Club.

“I did get a bronze medal from the USGA,” she says, for finishing 22nd and she’s not sure whether she’ll give that keepsake to the museum or keep it in the family. She credits advice from a legendary golf teacher in Northern Kentucky, Highlands Country Club pro Harry McAtee, with giving her the best advice: “Play from the men’s tees.”

And her older brother Chuck, who would go on to play golf at the program Arnold Palmer made famous at Wake Forest, for letting her “tag along” even if she was four years younger. And of course, her parents, Charles (Chuck) and Loretta. “Did I mention them by name?” she asks. She did.

She didn’t mention these accomplishments but we will: her four Kentucky Amateur titles, her three Cincinnati Met titles, or that at one time in 1971 when she owned seven course records in five different states.

And she did want to clear up one “urban legend,” she called it with a twinkle in her eye about how tough she was as a coach. “I never made my Dixie Heights boys practice in the snow,” she said. Then long pause. “There may have been a few snowflakes that one day at Summit Hills but . . . “

Indeed, on a day when the NKSHOF brought in as eclectic, and representative, a group as we can remember – and we can say that as a board member since we had no part in selecting them – this was special.

There was a race-tracker and a coach with more than a century’s worth of experience between them. And in addition to Margaret, two other individual sports specialists who talked of how different their sports can be.

“There are not a lot of runners in the Hall of Fame,” said inductee Drew Harris, “the best runner in Northern Kentucky University’s track and field history,” MC Kenney Shields called Drew.

Guest speaker George Vogel, WLW’s sports director, followed that take with a note about his own days as a Georgetown, Ohio, High School cross country hopeful. “How lonely is it out there?” George asked, “It’s a hell of a lot lonelier when you’re slow.” Which is why his running career ended that day he and a teammate hitch-hiked back to the school on a training run and got caught.

Unlike Vogel, who talked of how much the TV sports business has changed in his 40 years at WLW, Harris and tennis star Jason Yeager talked about something that never changes – family support. And a family that followed Harris on his NCAA races from California to North Carolina where his 16th-place finish was the best ever at NKU.

For the former Dixie Heights and UK tennis star Yeager, “being a father now and seeing the community support for my son, this is what Northern Kentucky is all about.” And how with “the Molony, Hussey, and Yeager families,” watch out for tennis here to take off.

Paul Devoto started coaching track kids at St. Catherine’s in Ft. Thomas before the 1970 Newport Central Catholic grad had graduated from high school. And as Paul said he “liked to say, I had a 100 percent graduation rate.” His wife gets the big thanks for more than a half-century coming to his games, Paul says, but so do his sister, brother, nieces and nephews. Definitely a family affair in Ft. Thomas.

Next, for all the race-trackers over all the years in Northern Kentucky, came horse trainer W.J. Danner, a Kansas native who came to Kentucky for the start of new Latonia and stayed for Turfway, Keeneland, Churchill, River Downs, and Beulah Park. He started training in 1954, worked at it for 46 years, won more than 700 races and 16 stakes races, worth in today’s money, many millions of dollars.

“I made quite a bit of money . . . and spent it all,” said Danner, who was the leading trainer at Latonia the year Northern Kentucky’s own Steve Cauthen was leading jockey as an apprentice. He started out riding Shetland ponies and finished up with his family working the trainer/owner operation. “I used to be good looking,” said Danner, 88, “now I’m looking good.” His horses own two world records – in the two-mile and the three-mile.

Speaking from his wheelchair, as a result of an automobile accident, former St. Henry High School goalkeeper – and chess master – Andrew Wesselman, thanked the support of his wife for allowing him to speak on the value of athletics in his life. An all-state goalkeeper, Wesselman helped the Crusaders to the 2005 All A state title with his play in the net.

And finally, in a sobering moment on the day, Shields, who filled in as MC for Pres. Joe Brennan who was out as the result of Covid exposure, revealed that he’s been diagnosed with amyloidosis. “They tell me I’ve got five years to live,” said Shields, Northern Kentucky’s all-time winningest basketball coach at St. Thomas, Highlands, and NKU. “I’m 81,” said Shields, who is in an experimental program for treatment of the disease that thickens the walls of the heart muscle, and “I plan to live every moment.”