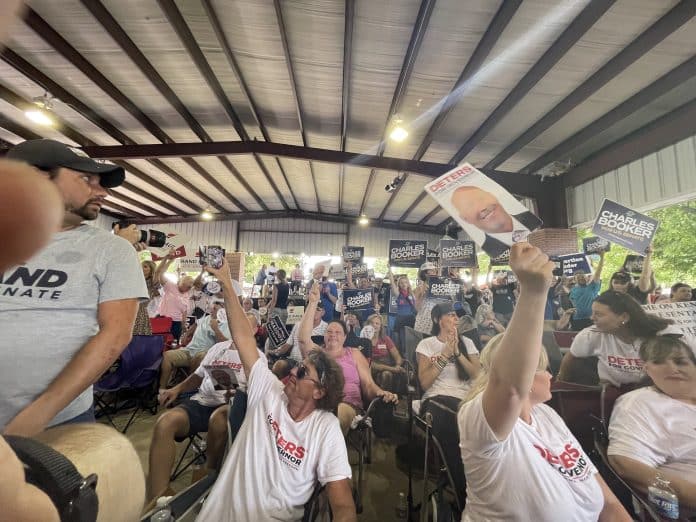 With this year’s Fancy Farm being another GOP-heavy event, the political jabbing was mainly targeted at the only three Democrats scheduled to speak.

Deters did, however, show up with a contingent of roughly 20 people and gave an early morning speech from the back of his truck before any attendees arrived at the picnic.

The Fancy Farm picnic is an annual event that features barbeque and campaign rallies on the property of the historic St. Jerome Catholic Church in Fancy Farm, Kentucky, in the far western part of the state.

While political jabs took precedent, there were somber moments to commemorate the 37 lives lost in the Eastern Kentucky floods. There was also mention of the tornadoes that took place just down the road in Mayfield in December of 2021.

House Speaker David Osborne (R-Prospect) emceed the event. He highlighted some of the legislation that the Republican-dominated legislature passed in the 2022 session, including an omnibus abortion bill, a bill that bans trans athletes from competing in girls sports, and a bill that will eventually cut the income tax.

“It’s difficult to be funny during these times,” Osborne said of the natural disasters. “Our sense of humor has helped us endure before and only sharpens our resolve.”

In a rare bipartisan moment, Osborne complimented Gov. Andy Beshear on his response to the eastern Kentucky flooding and tornadoes that swept through western Kentucky.

“In all seriousness, I appreciate the governor’s work, and I thank him and his administration for handling the flooding in Eastern Kentucky and for making the decision to stay here in Kentucky rather than go overseas,” Osborne said, referring to Beshear’s scheduled trip to Israel, which he canceled to deal with the flooding.

Osborne and the rest of the Republican contingent spent time talking about the omnibus abortion bill that passed in this year’s session. But, it’s the two 2019 abortion ban laws that took effect after Roe v. Wade fell earlier this summer and a proposed abortion constitutional amendment that dominated headlines in the week leading up to Fancy Farm.

Last week, an appeals court judge ruled in Cameron’s favor to reinstate the abortion rule that bans the procedure as part of the Fetal Heartbeat law and Human Life Protection Act. Then on Wednesday, Kansas voters rejected a measure that would have banned abortion in their constitution. Some drew comparisons with Kentuckians having a similar measure on the ballot in November.

Pro- and anti-abortion rights activists attended Fancy Farm in order to push their stance on Constitutional Amendment 2, or the No Right to Abortion in Constitution Amendment, which would remove the right to abortion from Kentucky’s constitution.

“We watched what happened in Kansas, and all eyes are on Kentucky,” said Addia Wuchner, executive director of Kentucky Right to Life. Last week, Kansas voters voted down a similar measure 59 to 41.

Wuchner talked with LINK nky last week about how she thinks the confusing language in the Kansas ballot referendum affected how Kentucky’s is written.

“I think our amendment is very straightforward and not as complicated,” Wuchner said.

Tamarra Wieder, state director for Planned Parenthood Alliance Advocates, said she expected a lot of rhetoric to support the amendment at Fancy Farm. Still, politicians taking away the opportunity for healthcare is dangerous and Kentuckians know it, she said.

“With the constitutional amendment, what we’re seeing not only statewide but nationally is that people are upset at the overreach of politicians taking away the opportunity for doctors to provide care for their patients,” Wieder said.

Cameron took questions from reporters before the event. Already receiving an endorsement from former President Donald Trump for the 2023 race, Cameron wouldn’t answer if he thought the 2020 election was stolen – a lie perpetuated by the former president.

Despite having a microphone, some chants nearly drowned Cameron out in his official speech.

The most targeted jabs of the day occurred between Kelley Paul, the wife of Sen. Rand Paul, and his challenger Charles Booker. Paul, and Sen. Mitch McConnell, didn’t attend because the Senate convened into session in Washington.

“Kentuckians show up,” Booker said of the Commonwealth’s response to the natural disasters over the last year, “and that’s why it should be no surprise to anybody that Rand Paul is nowhere to be found.”

Kelley Paul took aim at Democrats’ policies, which she said have led to higher prices and inflation, while also taking aim at the LGBTQ community.

“The Democrats went from promising a chicken in every pot to a drag queen in every school,” she said.