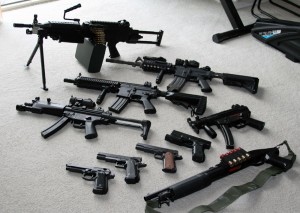 This article has been corrected to reflect that the Senate advanced the gun-related legislation. An earlier version stated that the bill had passed.

The United States Senate advanced a bipartisan gun safety bill Tuesday by a vote of 64 to 34 that could be the most impactful gun legislation in the nation in decades.

The Bipartisan Safer Communities Act is an 80-page bill that would provide more extensive background checks, especially for those under the age of 21. Adults aged 18 to 21 must wait 10 business days while authorities review mental health and juvenile records.

The bill would also provide funding for states to implement red-flag laws that allow authorities to take away weapons from those experiencing a mental health episode or who are deemed dangerous.

In Kentucky, one such bill failed to make it to committee during the 2022 legislative session. The Crisis Aversion and Rights Retention law, sponsored by State Senators Morgan McGarvey (D-Louisville) and Paul Hornback (R-Shelbyville), would help gun owners get access to mental health services in the event of an episode.

“CARR (Crisis Aversion and Rights Retention) is a law to help gun owners going through a crisis moment,” said Whitney Austin, a Fifth Third Shooting survivor and the CEO of Whitney/Strong, an organization focused on responsible gun ownership. “It could be that the crisis moment is there intent on harming themselves, like suicide, or harming others whether that be mass violence like what happened to me, moments of domestic violence, really any violent incidence using a gun.”

While the state bill didn’t gain traction this past session, it could potentially gain ground in the future if states receive funding for red flag laws from this federal bill.

The legislation comes on the heels of a mass school shooting that left 19 students and two teachers dead in Uvalde, Texas.

“I support the bill text that Senator (John) Cornyn and our colleagues have produced,” McConnell said in a statement, referencing his Republican colleague from Texas who helped negotiate the bill with Democratic Senators. “For years, the far left falsely claimed that Congress could only address the terrible issue of mass murders by trampling on law-abiding Americans’ constitutional rights. This bill proves that false.”

Northern Kentucky’s Congressman, Rep. Thomas Massie, has been outspoken in the past about gun legislation, but he declined to comment for this article.

State Rep. Savannah Maddox, a Republican from Dry Ridge who is running in the GOP primary for governor next year, put out a statement on social media criticizing the federal effort.

“Our 2nd Amendment rights have been under attack at the federal level this week, and moderate republicans (sic) are openly pushing for additional gun control measures,” Maddox wrote in part. “This provides a perfect example of what it means to lead from the front, and it calls into question why certain gubernatorial candidates are unwilling to fight back or even make their stances known!

“The fight to reclaim our nation as a constitutional republic is now at the state level, and we’re going to win this battle one state at a time.”